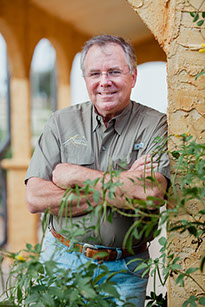 Dr. Stone (Bill) is a native Texan, born at Fort Hood, Texas a few yesterday’s past.  He spent most of his formative years in and around Houston, where he attended St. Thomas High School.  From there his blood turned Maroon and White at Texas A&M where he received his Bachelor’s degree in Animal Science followed by his Doctor of Veterinary Medicine.  He interned at the University of Tennessee – Knoxville in Large Animal Medicine and Surgery.  Upon completion of the internship he returned to Katy, and became an associate at Katy Equine Clinic, owned and operated at the time by Dr. Mike Heitmann.

His interest in a surgical specialty took him to Wisconsin for a time.  While there, he received a Master’s Degree in Veterinary Science, and became a Diplomate of the American College of Veterinary Surgeons.  He stepped away from the university and built a referral surgical hospital in Delevan Wisconsin, which he operated with a veterinary group for 10 years.

After spending enough time in Wisconsin to understand how cold things can really be, he started making the move back to Texas as a consulting specialist at Dr. T’s Equine Clinic.  He made the permanent return to Texas in 2010 when he accepted a position at Katy Equine Clinic – back where he started.  In 2016, he purchased the practice from the group in Florida, and is now building a great team of horsemen and women with pride in horsemanship and quality veterinary service from wellness care to complex medical and surgical concerns.  Dr. Stone returned to Texas A&M in 2015, enrolling in the Executive MBA program receiving his MBA in May 2016.

Dr. Stone’s hobby list is pretty short, but then again, he is lucky enough not to have to go to work every day!  He has two children Zach, who completing his residency in Orthopedic Surgery at the University of Florida – Gainesville.  Tiffany, also a veterinarian of the Florida variety, practices in a small animal practice in Houston.  Between the Doctor’s Stone they can fix your horse, your dog, or yourself! 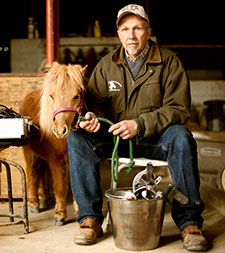 Carl Mitz has over 25 years in Equine Dentistry and is a third-generation horseman.  He has held State Racing Licenses in Kentucky, Ohio, Michigan, Arkansas and Florida to provide dental maintenance to racehorses.  One of his most well-known accomplishments is his research and development of equine dental instruments and techniques for horses of all sizes and purposes.

He has been published in two veterinary manuals – equine Dentistry:

A Practical Guide by Pat Pence, DVM; and The Manual of Equine Dentistry by Tom Allen, DVM

He has also been an associate, consultant and volunteer for many organizations, universities and registries to promote the need for qualified dental providers to ensure the betterment and health of the horse.

In 2011, he was appointed to the Advisory Committee of the Texas Board of Veterinary Medical Examiners. 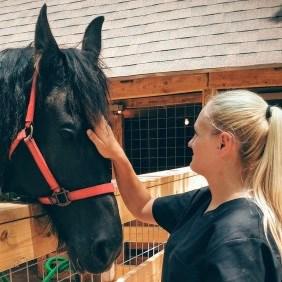 A Dallas-Fort Worth native, Tracey grew up around horses since childhood, where she rode and cared for neighbor's horses and competed in hunter/jumper events.  She received her BS in Animal Science from Texas A&M University, while also training young riders and horses at a local barn.  After college, she furthered her education and earned her AAS in Veterinary Technology to become a Licensed Veterinary Technician.  For fun, Tracey enjoys traveling with her husband, and playing with her three marvelous animals, a 75-lb wanna-be-lapdog and two cats. 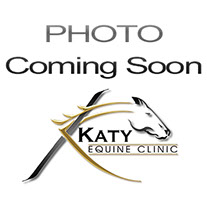 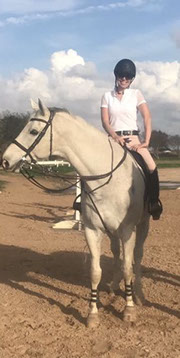 Lisa Workman is Katy Equine Clinic’s Office Manager.  Having loved horses for as long as she can remember, Lisa spent her youth showing the Hunter/Jumper A-circuit in New England through the junior levels.  After attending college in Amherst, Massachusetts she came to Houston to study law where she ultimately earned her Juris Doctorate degree from South Texas College of Law in Houston, Texas.  After passing the Bar Exam in July, 2009 Lisa worked as a criminal defense attorney in Harris and Galveston counties.  Today, Lisa helps run local stable, West Houston Hunter Jumpers, with trainer and partner, Brent Workman, where she continues to show in the hunter divisions. 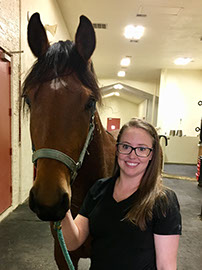 Rebecca grew up in Brookshire and always had a passion for animals. She attended Texas State University after high school where she received a BS in Wildlife Biology, while also volunteering at the Austin Wildlife Rescue where she helped care for and rehabilitate injured and orphaned wildlife. After college, she went to Lone Star College in Tomball to pursue a degree in Veterinary Technology. Rebecca graduated from Lone Star in December 2016 and received her license in October 2017. She began volunteering at Katy Equine Clinic in September 2016 and was hired on once she completed school.  When she isn't working, Rebecca enjoys spending time with her husband, their son, and their two cats. 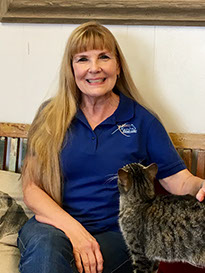 An avid horseman from the get go, her momma couldn’t keep her away from the ponies.  Lucille ran barrels and still occasionally wears the buckle she won in competition.  Her daughter followed right in her footsteps.  Lucille’s mantel is full of her daughter’s trophies competing in FFA and rodeo speed events.

Lucille has been married to John Estes for over 38 years.  And they’ve been customers of Katy Equine almost as long.  They have two pampered retired horses, April and Aurora and have just acquired a new horse, Peanut, that is making Lucille look forward to being back in the saddle again.  “Just for trail riding”, she says.

She’s a Texas country girl and embraces all that it means.  She takes care of Katy Equine with her heart and soul.